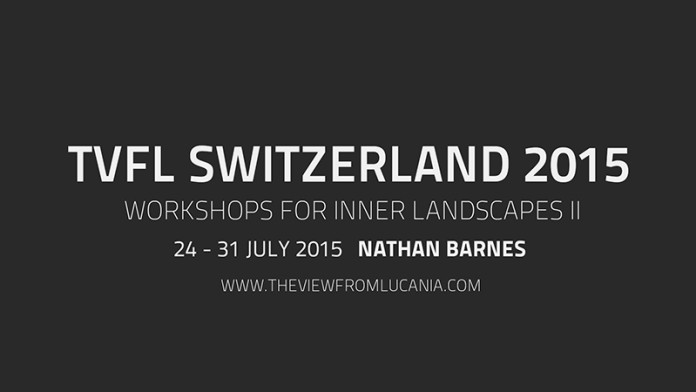 LEVENTINA VALLEY. The View From Lucania is proud to present a new workshop, conducted by the photographer Nathan Barnes, from San Francisco, California. The workshop is part of the second cycle of the project Workshops for inner landscapes, started last year in the city of Milan, Italy. The workshop will be a real full immersion in one of the most beautiful places in Switzerland, the Leventina Valley, mostly known as a transit axis leading from the Gotthard Mountain to the south.

The workshop is open to photographers, artists, craftsmen, dreamers Aim of the workshop is to learn how to build a large-format camera with your own hands and learn the related shooting techniques. In the evocative setting of the Leventina Valley we will spend seven days with the photographer Nathan Barnes and a craftsman of softwood to learn how to build a large-format camera and the basic techniques of shooting, rediscovering the ability to shape the material with own hands to get to the realization of photographic images and the development of the films.

The creation job is intertwined with daily, basic mountain life. Few comforts, limited electricity, wood for cooking and boil the water. The ultimate purpose is to recover the essential vision, “clean” the view, feel the body and mind through the manual activity and the dryness of life in a mountain hut. What to bring: Who needs can take its work tools. A notebook or pad of paper to write down sketches and projects, two packs of flat film 10×12.

Nathan Barnes. Born in San Francisco in 1963, he built his first camera pinhole at the age of twelve. Influenced by the films of John Ford and Willard Van Dyke, the photographs of Adams and Paul Strand, Eggleston and Diane Arbus, he spends most of his life working as carpenter than as a photographer. At the age of twenty-four he constructs a camera with teak wood and aluminum and leave on a journey of six months from Monterey County to Tijuana and Arizona. He quickly learn to develop his own negatives on the spot, inventing a motorized portable developing machine with thermostat and heater powered from his car. In 1993 he met Edward Ruscha to which it binds and which remains deeply influenced. In 1997 he made his first photographic book: Along the way, producing it with his own hands, crafting 150 copies sold in California and Japan. From 2002 he made itinerant workshop of construction, technique and use of large format cameras, development and print in a portable darkroom. His work is part of many private collections and has been exhibited in many galleries in Japan, USA, Arab Emirates, France, Sweden.

Culture Makers for a Climate Just-Future: Cortona On The Move a Parigi riflette sul cambiamento climatico