“Every instant devours a piece of the pleasure
Granted to every man for his entire season ”
Charles Baudelaire, excerpt from The Clock in The Flowers of Evil

Olivier Valsecchi’s new ) series is a journey through art history where each picture merges the tradition of the reclining nude with the still life painting genre from Flanders.
Faithfully devoted to his chiaroscuro approach of light, straightforward sense of composition and muted colour schemes, Valsecchi replaces baroque floral arrangements and the overlapping motif of Memento Mori by pale bodies, in order to create what he calls a Flesh Vanitas. His taste for eerie atmospheres draws the viewer into paradoxical tableaux where flowing movement and dumb stillness mysteriously interact.

While looking at Valsecchi’s Drifting series, obvious images come to mind : sand pouring through the hourglass, Bouguereau’s nudes, or even echoes of Dali’s soft watches as bodies seem to turn into liquid and drip off the table. Their chalky-white, expressionless faces remain silent while sparks of life sift out with the tremor of a leg or the twitch of an arm.
Straying the audience from their grounds of certainty, Valsecchi induces an unsettling doubt on whether his subjects are falling apart or withstanding paralysis. He investigates this tenuous and brooding space between inertia and the urge to go somewhere. His bodies appear to have been submitted to an exorcism, an epileptic trance, or a mutilation akin to a reptile being cut in two pieces – and yet still crawling.

Ultimately, Drifting is to be perceived as a conversation between Rembrandt’s Anatomy Lesson of Dr. Nicolaes Tulp and Géricault’s Raft of the Medusa. The table is alternately a canoe adrift on the open sea or a cold buffet offering souls in transit. Tainted with a surreal aura, it depicts the unutterable moment of confusion when a specific sequence is intriguingly and subconsciously connected to the next.
Valsecchi’s comment is that Drifting is a mediation between his previous painterly I am Dust project, and sculptural Klecksography series. « Still-life was the perfect fit for a post-war atmosphere. Beyond symbolizing the ephemeral nature of life, it relates to the notion of transitioning. I wanted to set bodies into an unfamiliar environment and infuse them with a feeling of disorientation, as if recovering from trauma or stuck in a vertigo. »
Drifting is an invitation to meditate at a mystical onirism, a haunting and cryptic gateway between near-death-like experience and the very next minute. 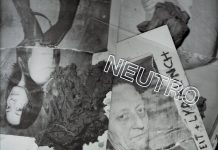 Jacopo Benassi porta Junk B in mostra a Reggio Emilia 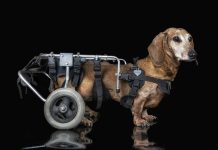 I ritratti bestiali di Claudia Rocchini in mostra a Pavia 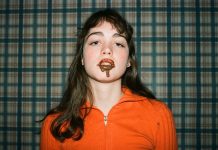